Review of All Our Yesterdays by Cristin Terrill 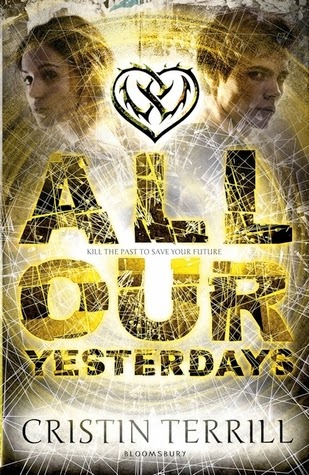 Em and Finn have a shared past, but no future unless they can find a way out. The present is torture - being kept apart, overhearing each other's anguish as the Doctor relentlessly seeks answers. There's no way back from here, to what they used to be, the world they used to know. Then Em finds a note in her cell which changes everything. It's from her future self and contains some simple but very clear instructions. Em must travel back in time to avert a tragedy that's about to unfold. Worse, she has to pursue and kill the boy she loves to change the future.

Wow, this book man. I couldn't stop reading it! Seriously, I was sitting sloth like in a nest of duvet, crisp packets, desperately wishing my lucozade bottle would just fill itself back up already.

Time Travel, multiple narrators and flashbacks are three things that most authors struggle to use effectively and I usually end up just bewildered but Cristin manages all three and I kept up with every new character, every plot twist. I'm really impressed!

The main characters, Em and Marina are two very different personalities and at the start it felt a little odd, going from Em in a dank cell to Marina, in a cosy bedroom, talking about boys. I instantly connected with Em as I love a fighter chick but took a few chapters to really start to like Marina. Then there's Finn and James - Finn made me laugh in the very first chapter, so I basically sold my soul to him at that very moment. James, not so much as I found him quite shallow and cold but that's not really expected as you'll see when you read the book yourself. Every character is well formed and have their own personalities, no cardboard cut-outs. Again, I find myself being very impressed and stuff.

Getting technical with the wibbly wobbly timey wimey stuff. It was perf. Seriously. Everything was explained from how it came about in the first place to how one even does the thing and paradoxes and side effects and if I could kiss this author on the cheek right now I would do because there was just so much thought that went into this that made it so much more... more.

I do have one teeny tiny itsy bitsy problem with the book. Actually not the book because my problem is that there's... dun dun duuuuuuun... a sequel. There story is completely wrapped up by the end of the book, everything sorted out and there is absolutely zero reason to even bother with a sequel. Unless you know, you're trying to get more money or something. But publishers wouldn't do that to us would they.