Review of Where The Rock Splits The Sky by Philip Webb 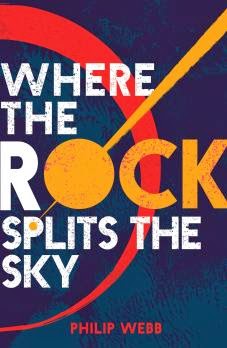 Where Megan lives it's forever dusk: an endless indigo sky above a wounded land that's slowly dying. Ever since the 'visitors' came, the world has stopped turning. No one sleeps, everyone's afraid. But Megan wants to know what's coming. She'll stop at nothing to save those she loves. She'll ride across a forsaken wilderness to where the rock splits the sky to set the world spinning again - and discover what she's truly made of.

I received this for  review from Chicken House a couple of months ago during my blogging break and although I wasn't reading books at the time (shocking, I know), the minimalistic cover and shiny orange metallic writing caught my attention, as did the description. I do have Philip Webb's other book, 6 Days but it's been sitting on my shelf for over a year now collecting dust. After reading this fast paced, gripping adventure, I'll be sure to pick it up.

Four things to note about Where The Rock Splits The Sky - it has just 266 pages, yet has a well paced story that doesn't feel rushed in any places. It's a Sci-Fi Western that people will probably try and squeeze it into the Dystopia category (the 3 users on Goodreads, I'm looking at you). Although it has some Dystopia elements, I don't think it's fits the modern definition of Dystopia enough to fit it into that definition. As far as I can tell, it's a stand alone novel, which I know will appeal to the many readers who are tired of waiting three years to finish a story that could be wrapped up in one book.Finally, it has a really freaking long title and I keep writing When instead of Where.

I don't think I've ever read a YA western story, which surprised me when I realised this. The 'Wild West' is a staple the Hollywood movie's diets and I've seen all kinds of Westerns portrayed on TV from West World in 1973 with the amazingly talented Yul Brynner, to comedy movies like Wild Wild West and more recently The Lone Ranger. But the Wild West doesn't feature much in books these days, despite it being hugely popular on the Big Screen. Where The Rock Splits The Sky manages to take all the classic Western elements and a lot of desert, add Sci-Fi and make a really, really good story.

Aliens are becoming more popular in YA books and it was refreshing to have a YA book where the girl doesn't fall in insta-love with an alien. The aliens, or Visitors in this story are not something you want to fall in love with, especially when a few of them are hiding in reanimated corpses and have maggots crawling out of their eyes *shudder*. That was really freaking gross. Almost as gross as the rain of fish. We have three main characters, Megan, Kelly and Luis. Megan is our main character and we see everything from her point of view. Luis is kind of her sidekick and follows her everywhere and Kelly they pick up a few chapters in, we find her in a floating town with no idea what has happened to the world. Kelly was my favourite of the group and the one I related to the most, constantly cracking jokes. I wasn't sure about Luis as there was almost no description of him that I can remember.

Although I had a little difficulty getting used to the story (nothing is explained, you kind of just have to pick it up as you go along), I really enjoyed the inbetween parts of Where The Rock Splits The Sky. There was quite a bit of travelling but it was interspersed  with strange towns where something weird happened each time - they met Kelly, cleaned bat poo, almost got arrested for underage gambling... meanwhile trying to keep out of the way of Jetho's Gang, a pack of Visitors that are on their trail. It's a thrilling read that I enjoyed very much and I was rather sad when it ended. If you love Sci-Fi, Western or just Adventure tales, I highly recommend this book.

Received free from Chicken House in exchange for an honest review