Top Ten Tuesday is hosted by The Broke and the Bookish

First off, a small hello world post! I used to be ComaCalm's Corner but I took a short break from blogging a while ago and wanted to reboot my blog with a new name. I read all teen books and some sci-fi/fantasy books too.  I've just installed bloglovin and have an abysmal two followers on there so if you find your mouse hovering towards the button, please don't stop it... (I have no shame)

I chose Dystopia, because I am, quite frankly, obsessed with it. I've read nearly every dystopia I can get my hands on, my wishlist is full of more and my bookcase is bursting. Here's my favourites and what's unique about them: 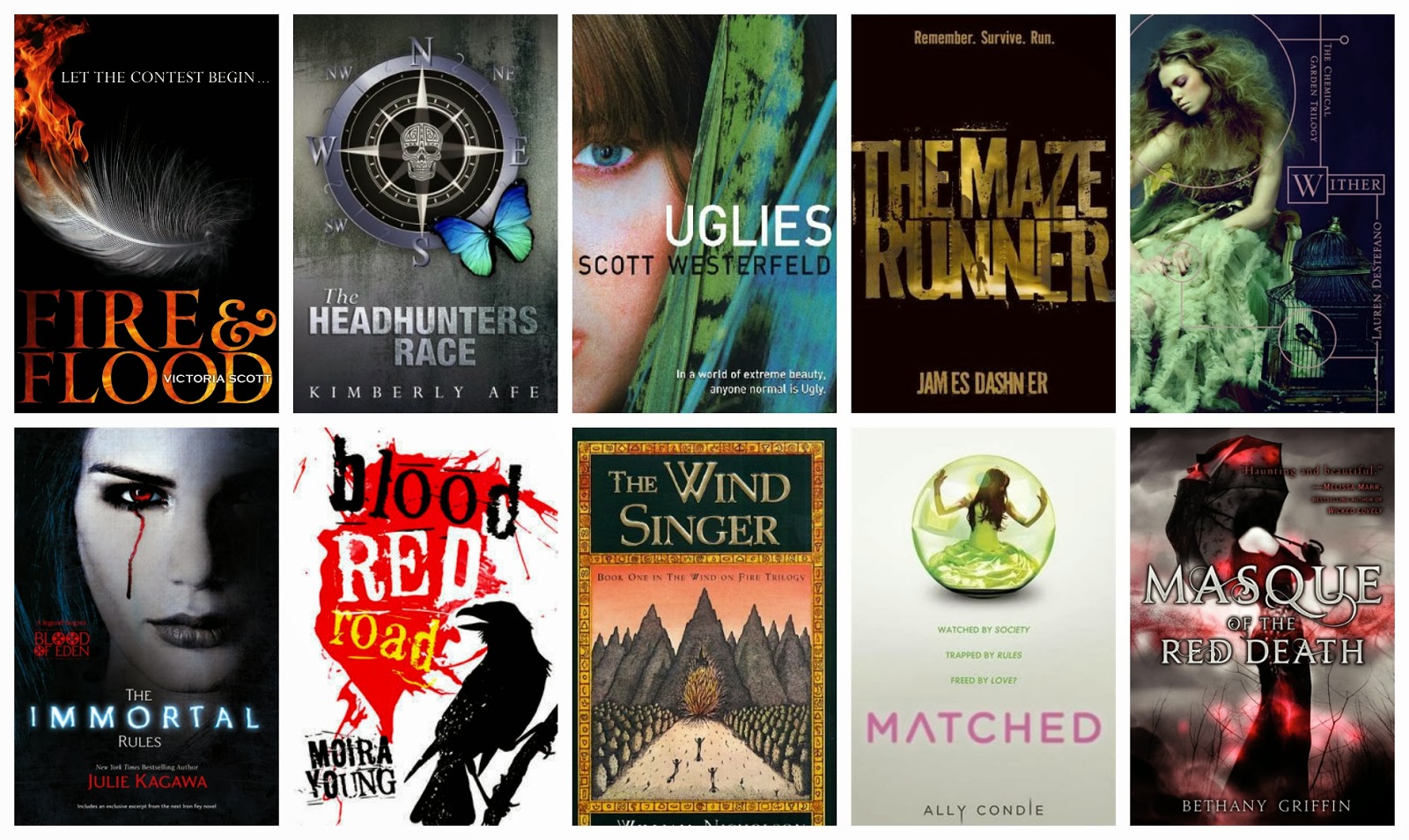 Fire and Flood by Victoria Scott (Review)
This was actually the last book I read and I finished the whole thing in one sitting, stopping only to help my partner with something. I probably wasn't much help as I wanted to get back to the book! Fire and Flood seems to be set in modern day. Tell receives a mysterious invite to The Brimstone Bleed, a race across four ecosystems with a creature known as a Pandora, and the prize is a cure to any illness. It just so happens that Tella's brother is dying...

The Headhunters Race
I actually gave this book 3 stars due to it's stereotypical romantic elements (review coming soon), however the plot is unique and I enjoyed many of the Dystopian aspects. Like Fire and Flood, Avene has to race - however this is where it gets different. Because Avene lives in a futuristic world where she has been accused of the murder of her mother, and thrown into a prison known as the Dead Man's Pen. (Pen - Penitentiary geddit?) The only way out is run the race - across forest, desert and cannibals. Of course there's cannibals.

Uglies - Scott Westerfeld (Review)
When I first read this I loved it. It was unique. Tally is waiting to be made into a Pretty - supermodel gorgeous, partying all night and day. But her friend, Shay, knows something's is off this world and runs away. Soon after Tally questions it too and begins the fight against the government. This series involves elements we all know in modern Dystopia - oppressive government, treks across a desert, romance. However, this did it first, back in 2005 and I highly recommend it.

The Maze Runner - James Dashner (Review)
This is one of the most unique Dystopias I have read. Thomas wakes up in a box in the middle of the glade, a giant space in the middle of maze. The only thing he remembers is his name. Which is exactly what happened to the group of boys that greet him when he arrives. With their help (and a lot of stubbornness) he begins to try and crack the Maze, to find out a way out of there. Except at night the walls close, and hideous creatures known as Grievers lurk the corridors. Imagine like... slugs with metal attachments. And then make them bigger than you. And hungry. That's basically what I pictured.

Wither - Lauren Destefano (Review)
Wither has something a lack of teen books lack - beautiful writing. It sucked me in from the very first page. You've read this story right? You don't need the plot because you've read it at least ten times, yes? Here's some info: 'By age sixteen, Rhine Ellery has four years left to live. She can thank modern science for this genetic time bomb. A botched effort to create a perfect race has left all males with a lifespan of 25 years, and females with a lifespan of 20 years.' Despite it's obvious flaws (a set lifespan really?), I enjoyed reading about Ellery's time in the house that became her prisoner. However I'm not going to lie and tell you the sequel was amazing because I thought it sucked.

The Immortal Rules - Julie Kagawa (Review)
It's a Dystopia with Vampires. I know it sounds terrible but this is Julie Kagawa people, she wrote like 6 books about fairies and she's still writing them and they're bestsellers. So if she can pull off fairies you bet she can write a world about Vampires and I will read that stuff. I loved it too, my only complaint being that there wasn't enough romance because the Potential Love Interest disappeared early on.

Blood Red Road - Moira Young (Review)
Let's trek across a desert again! So many deserts in YA, they get muddled after a while. However I remember this one well because it reads more like a fantasy than a Dystopia. It has girl on girl fighting, a kick as heroine, an extremely attractive love interest, you should read it. Really.

The Wind Singer - William Nicholson (Review)
This was the first Dystopia I read and one I recommend for younger readers who want to get into Dystopia. It's at a Middle Grade level. Kess's world  is strongly Dystopian, with residents divided into factions and given colour so they are easily distinguishable. However outside of the city, it has many Fantasy elements and from what I can remember more desert.

Matched - Ally Condie (Review is terrible, gosh)
Unique elements... erm... while I love this book, uniqueness is not it's strong point I'm afraid. I think I loved the main character a lot and that's what kept me reading.

Masque of the Red Death - Bethany Griffin (Review)
*waves arms* I love love love this book. It would be harder to pick out stereotypical elements than Dystopian in this Steampunk tale adapted from one of Edgar Allan Poe's short stories. I'd be lying if I said it didn't take some getting into and maybe I haven't read the sequel yet, but it's really good. I promise.

Leave your links below so I can stop by!